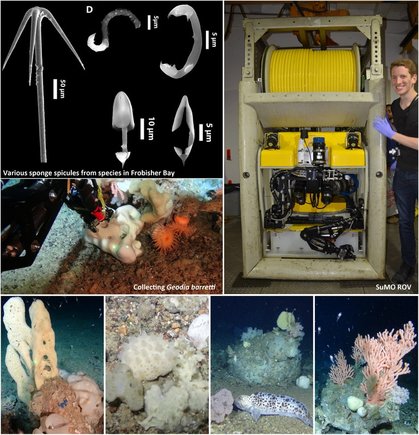 The diversity of deep-water sponges in the Canadian Arctic has historically been overlooked, in part because of difficulties associated with sampling deep hard bottom environments. As part of the ArcticNet HiBio (Hidden biodiversity and vulnerability of hard-bottom environments in the Canadian Arctic) project, regions of reported coral and sponge bycatch in Baffin Bay and the North Labrador Sea were targeted for extensive sampling using remotely operated vehicle (ROV), box core, and Agassiz trawl operations aboard the CCGS Amundsen. During expeditions in October 2015 and July 2016, 114 sponge specimens were retrieved from depths ranging from 72 to 1148 m and encompassing latitudes 60°18N to 68°15N.

A third and final cruise for the HiBio project is planned for July 2017 to continue sampling from sponge dominated hotspots in Frobisher Bay and Hatton Basin. ROV dives are planned for Disko Fan on the Greenland Shelf, Scott Inlet – a shallow water environment home to many carnivorous sponges, and Lancaster Sound in the Northern Canadian Archipelago.
Powered by